Exploring the isotopic 'landscape' helps physicists build models of nuclear interactions. Precision mass measurements from TITAN will improve our understanding of the astrophysical reaction paths that create all visible matter.

Combining TITAN data with other results from ISAC will allow physicists to test predictions made by the standard model. Compelling evidence for new physics will be confirmed if new measurements agree with existing data.

Measuring the mass of short-lived isotopes with high precision

Just as we study an atom's electron structure to understand chemical reactions, the nuclear structure can be probed to gain a better understanding of nuclear reactions. TITAN will be used to look at a class of isotopes that can change states to reduce their internal energy.

Nuclear models can be checked against their predictions for the nuclear charge radius, and spectroscopy is one way to perform this check. TITAN will study isotopes previously inaccessible to other experiments, and use highly charged ions for increased sensitivity.

Neutrinoless double beta decay, an extremely rare decay if it exists, would violate the Standard model and help characterize the neutrino's nature. At TITAN, the Q-value of Ca-48 has been directly measured, and its nuclear matrix element has been calculated using diagrammatic many-body perturbation theory to the second order. The increase in both quantities strengthen the case for a Ca-48 double-beta-decay experiment. [LINK]. Two TITAN publications featured. You can now view the Highlights collection and booklet online [LINK]. 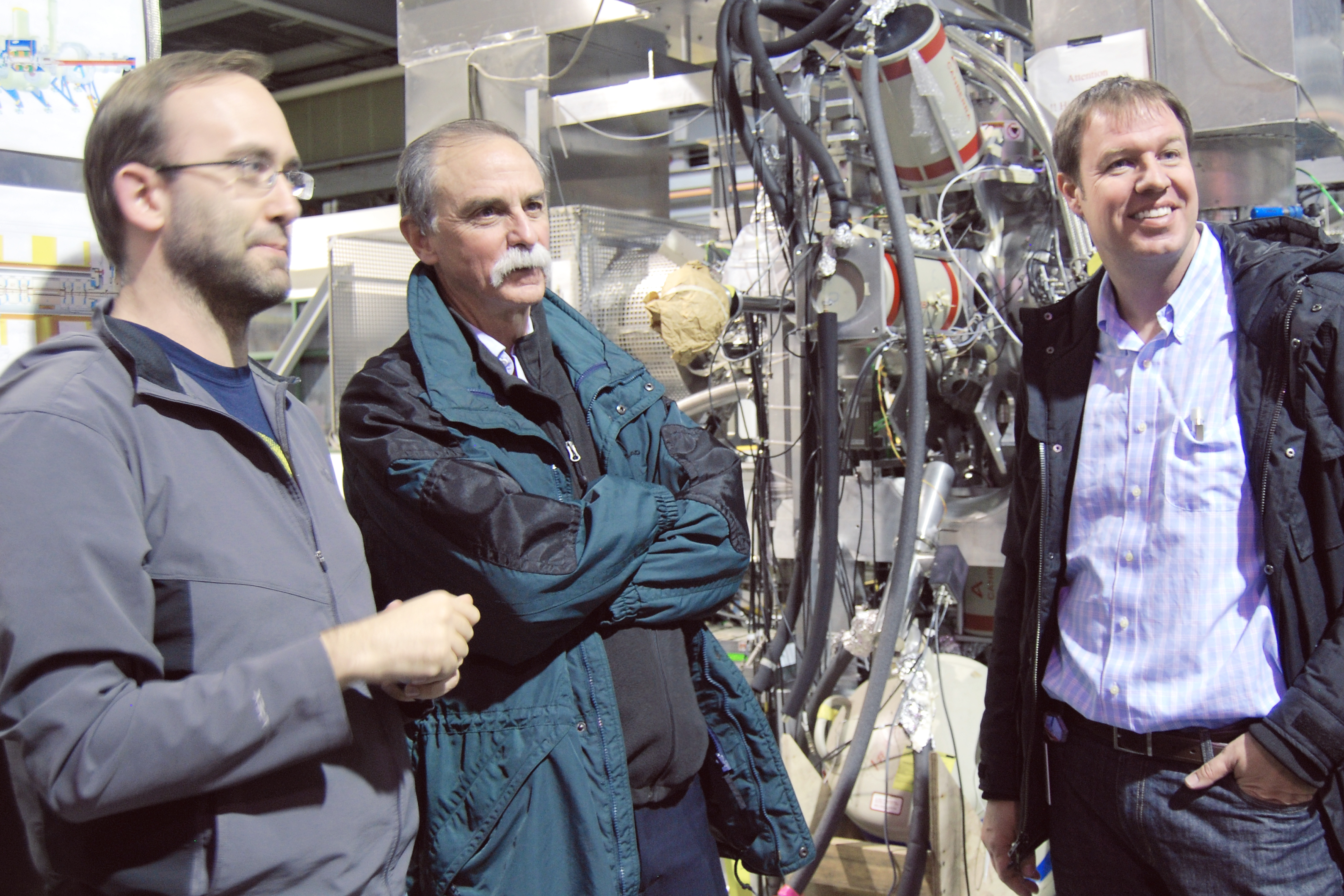 Recent high-precision mass measurements of 9Li and 9Be, performed with the TITAN Penning trap at the TRIUMF ISAC facility, are analyzed in light of state-of-the-art shell model calculations. We find an explanation for the anomalous isobaric mass multiplet equation behaviour for the two A=9 quartets.

The first direct mass-measurement of 6He and a mass-measurement of 8He at improved precision has been performed at TITAN. The 6He value shows a deviation from the literature of 4 sigma. We present a detailed comparison to nuclear theory for 6He, including new hyperspherical harmonics results. A correlation plot of the point-proton radius (calculated using the new masses) with the two-neutron separation energy demonstrates clearly the importance of three-nucleon forces.

The TITAN Penning trap has been built and optimized in order to perform high precision mass measurements with an accuracy in the sub ppb-range on both singly and highly charged ion. A detailed characterization of the TITAN Penning trap is presented and a new compensation method is derived and demonstrated, verifying the performance in the range of sub-ppb.

The TITAN Penning trap measured the masses of several neutron halos. Combined with laser spectroscopy measurements of isotopic shifts, precise masses can be used to obtain reliable charge radii and two-neutron-separation energies for these halo nuclei. It is shown that these results can be used as stringent tests of nuclear models and potentials providing an important metric for our understanding of the interactions in all nuclei.

The results of TITAN's first mass measurements of highly charged, short-lived nuclides in a Penning trap have been published in Physical Review Letters ([DOI). The studies have been performed in charge states q=8-12+ and include the nuclide 74Rb with a half-life of only 65 ms. You can have a look at [TRIUMF news] link. From May 24 to May 26 a TITAN collaboration meeting took place at TRIUMF. During this meeting the current status of TITAN was presented and road maps for TITAN's different experimental devices were defined. Please follow this link to view the group picture. The frequency ratio of 6Li to 7Li was measured using the TITAN Penning trap mass spectrometer. This measurement resolves a 16-ppb discrepancy between the 6Li mass of 6.015 122 795(16) u from the Atomic Mass Evaluation 2003 (AME03) [DOI]. Towards the determination of 2nbb matrix elements, we performed systematic studies with 124Cs and 126Cs. First, the radioactive ions were identified by their half life. Afterwards, we stored them inside the Penning trap and observed X-rays following an electron capture. A first summary of the run can be found here. The results of the High-precision Penning trap mass measurements of 9,10Be and the one-neutron halo nuclide 11Be are published in Phys. Lett. B 675, 170 (2009) The results of the First Penning-Trap Mass Measurement of the Exotic Halo Nucleus 11Li are published in Phys. Rev. Lett. 101, 202501 (2008) In-107 ions were injected and trapped into the EBIT -used in the Penning trap mode- and we observed X-ray / Gamma lines and Beta electrons from In-107 ions. For the very first time, highly charged nitrogen and oxygen ions are extracted from the EBIT and sent to the switch yard and the Penning trap. The EBIT is now completely connected to the TITAN beam line and first ions were shot through the trap and detected on a MCP at the gun position. The TITAN-EBIT is revived after two years of inactivity. A new electron collector was installed, trap electrodes were cleaned from spark-burned cryogenic vacuum grease, and an EPICS-controlled (PLC) vacuum system was installed. The electron gun cathode is being conditioned and producing a 20-mA electron beam. A meeting with collaborators from the University of Manitoba was held to coordinate the design and construction of the new TITAN cooler trap. The result of the first Direct Mass Measurement of the Four-Neutron Halo Nuclide 8He is published in Phys. Rev. Lett. 101, 012501 (2008). TITAN's 1st Experiment Takes Precision Mass of On-line Lithium Ions (more). Commissioning of the MPET beamline vacuum system. The MPET vacuum chamber is connected to the rest of the ISAC beamline. Emittance measurements of the RFQ with the OLIS source and reversed extraction carried out. The first reversed extraction from the RFQ was demonstrated using our offline test source. The magnet will be charged shortly and tested for field homogeneity. The EBIT arrived safely from MPI in Heidelberg. Work continues on the TITAN platform, which recieved electrical power recently. G. Gwinner at the University of Manitoba has received the grant to develop the HCI cooling trap. The trap will be used at TITAN to increase the setup efficiency when working with highly charged short-lived isotopes.
TITAN EBIT transmits electron beam of up to 50mA in the first tests.